on May 31, 2020
The most anticipated part of our trip. The most awaited. Had been thinking to be here since years.
The White Salt Desert. The land of Agariyas, the traditional salt makers. The area is the dried sea, become marshy in rainy season. Is surrounded by mangrooves and desert vegetation. At the centre is the big unending white dried crystallized salt. 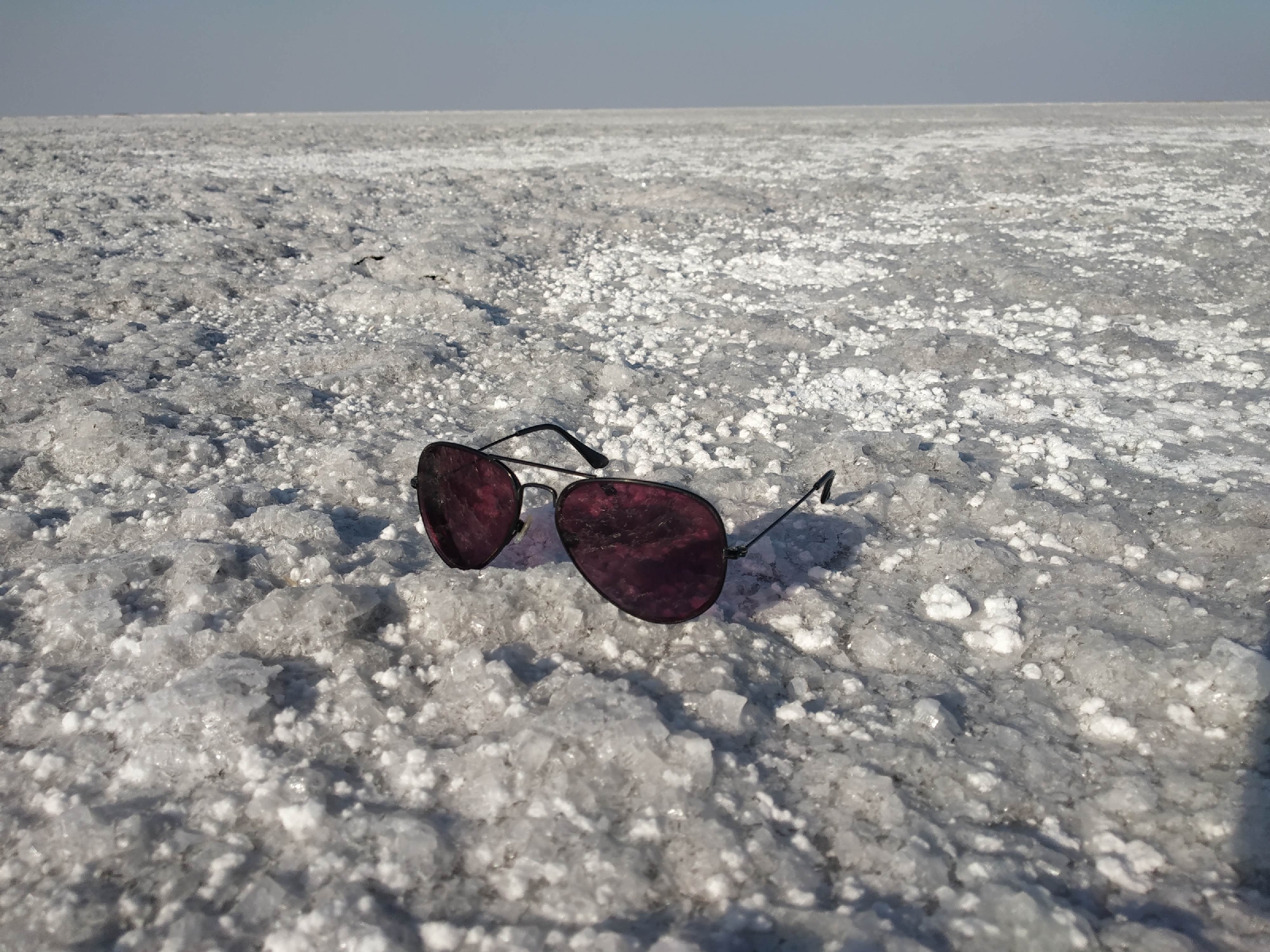 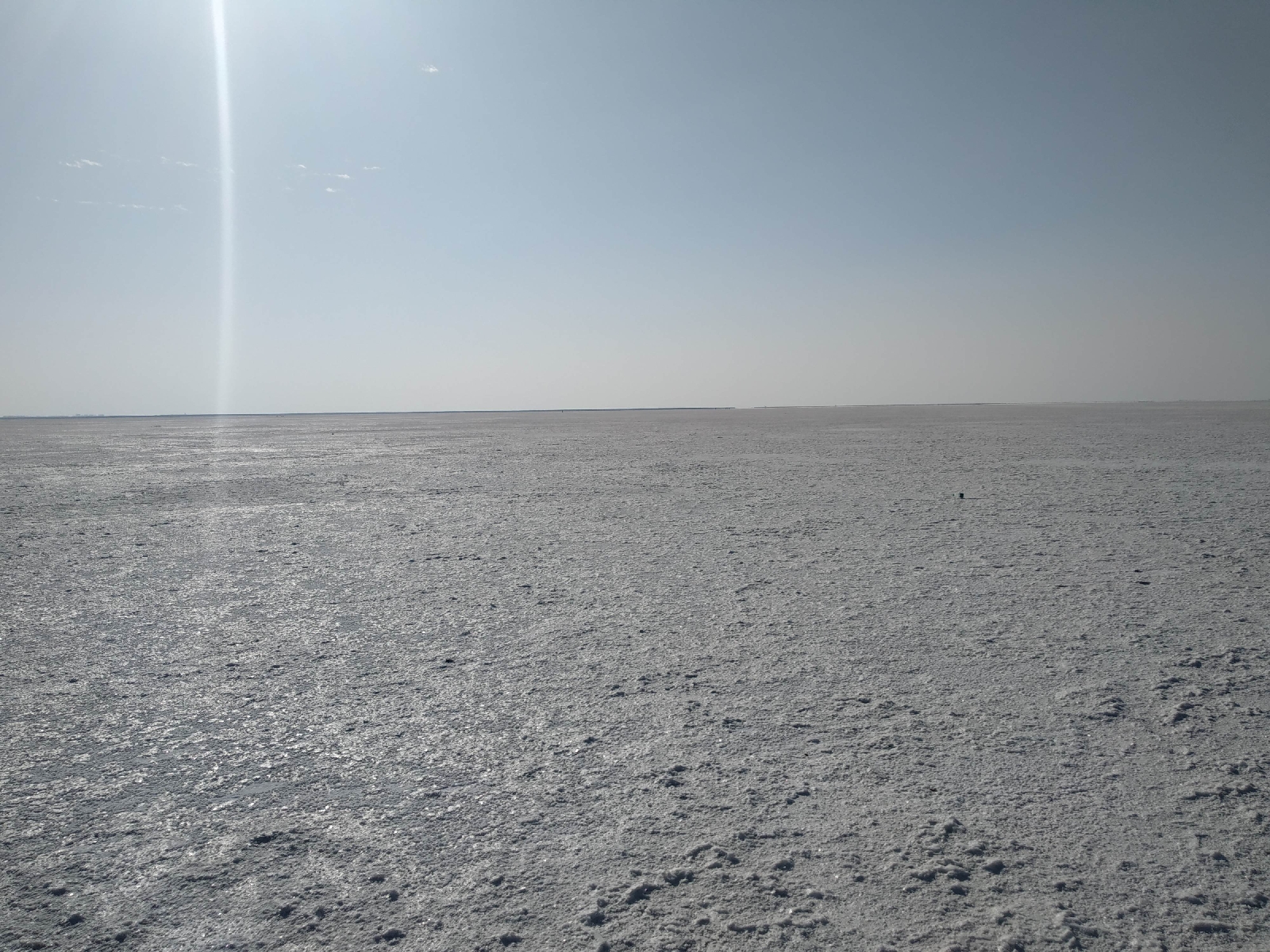 We have timed this perfectly, it was time for Runn Utsav. 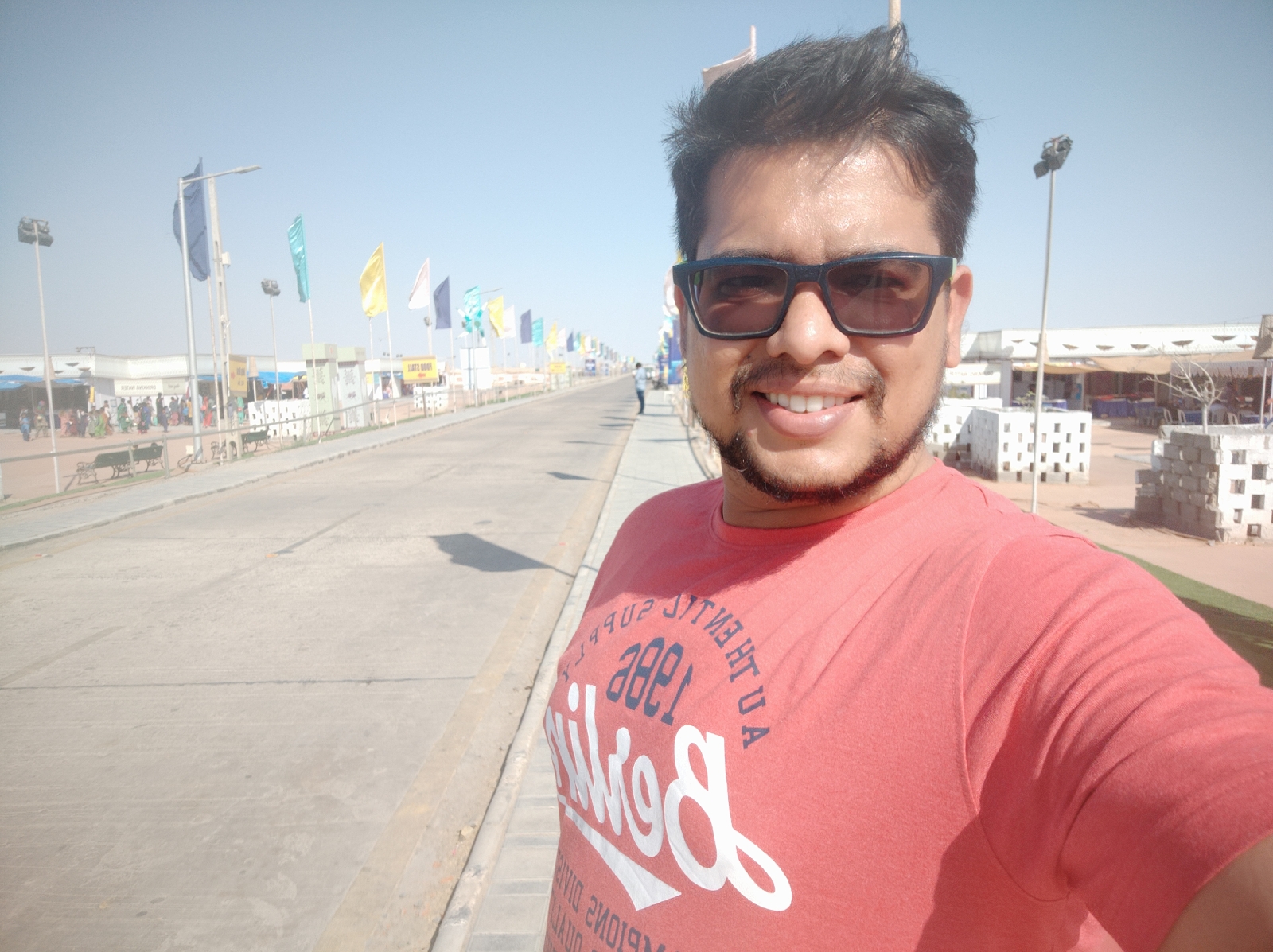 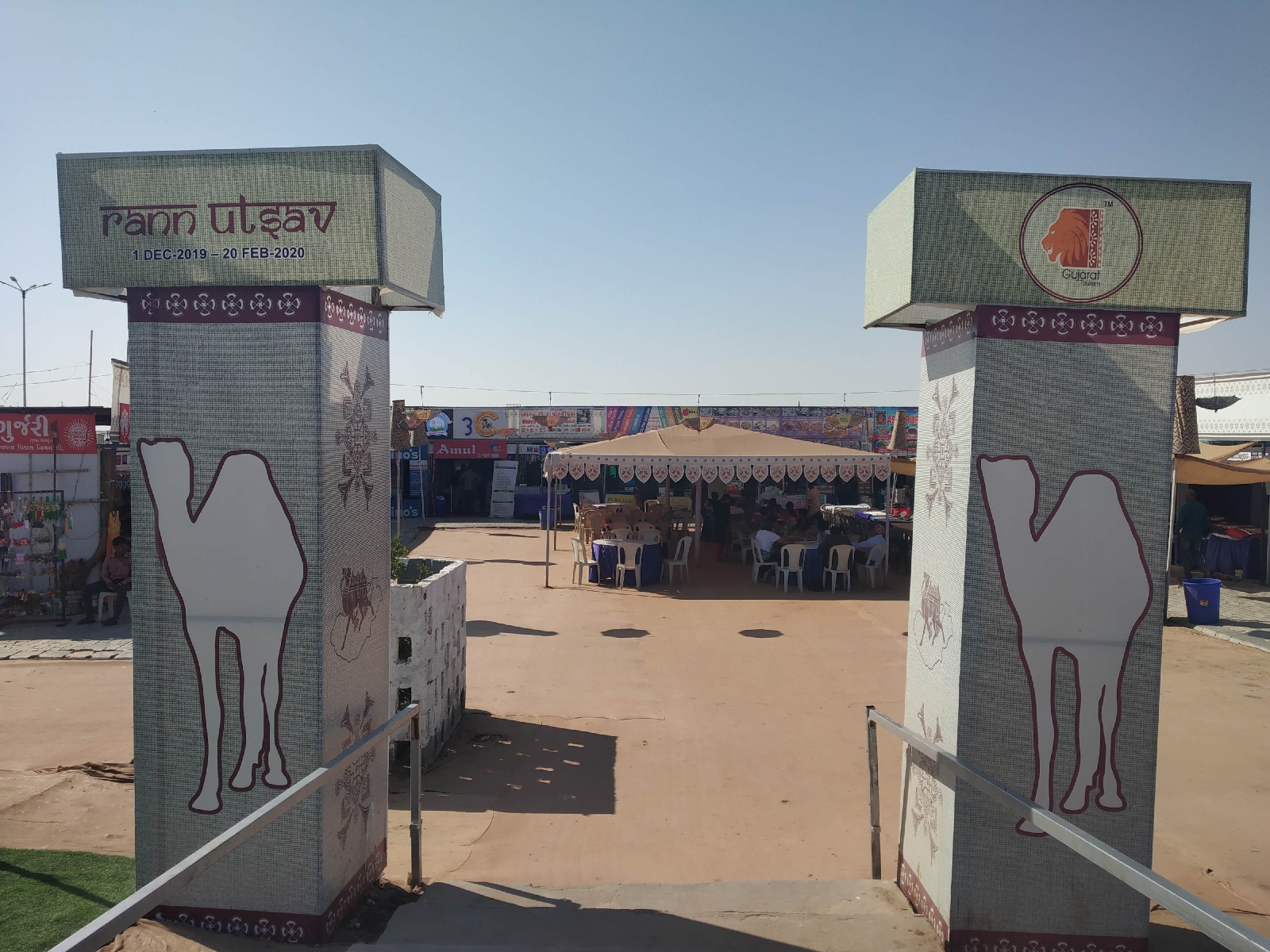 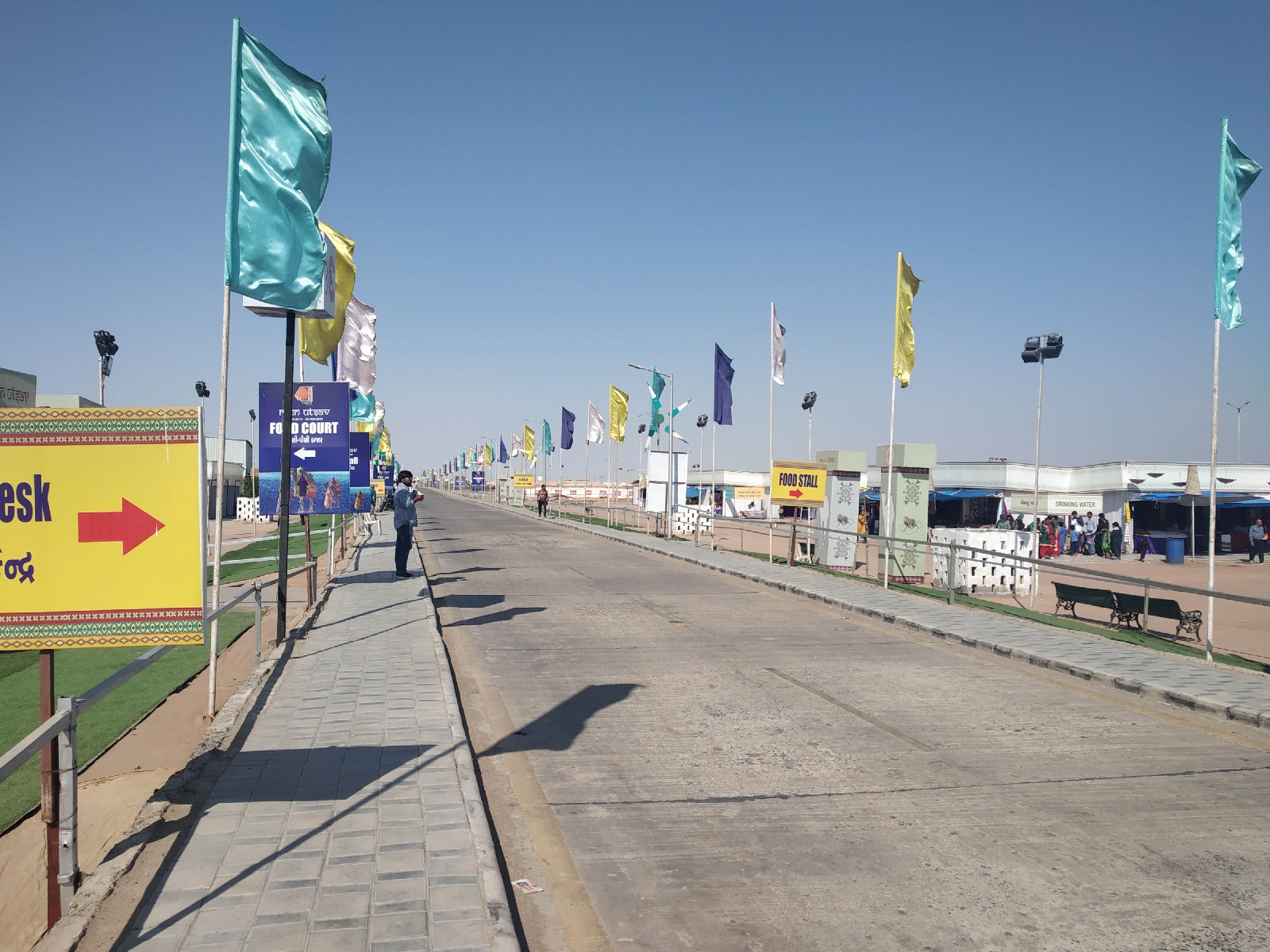 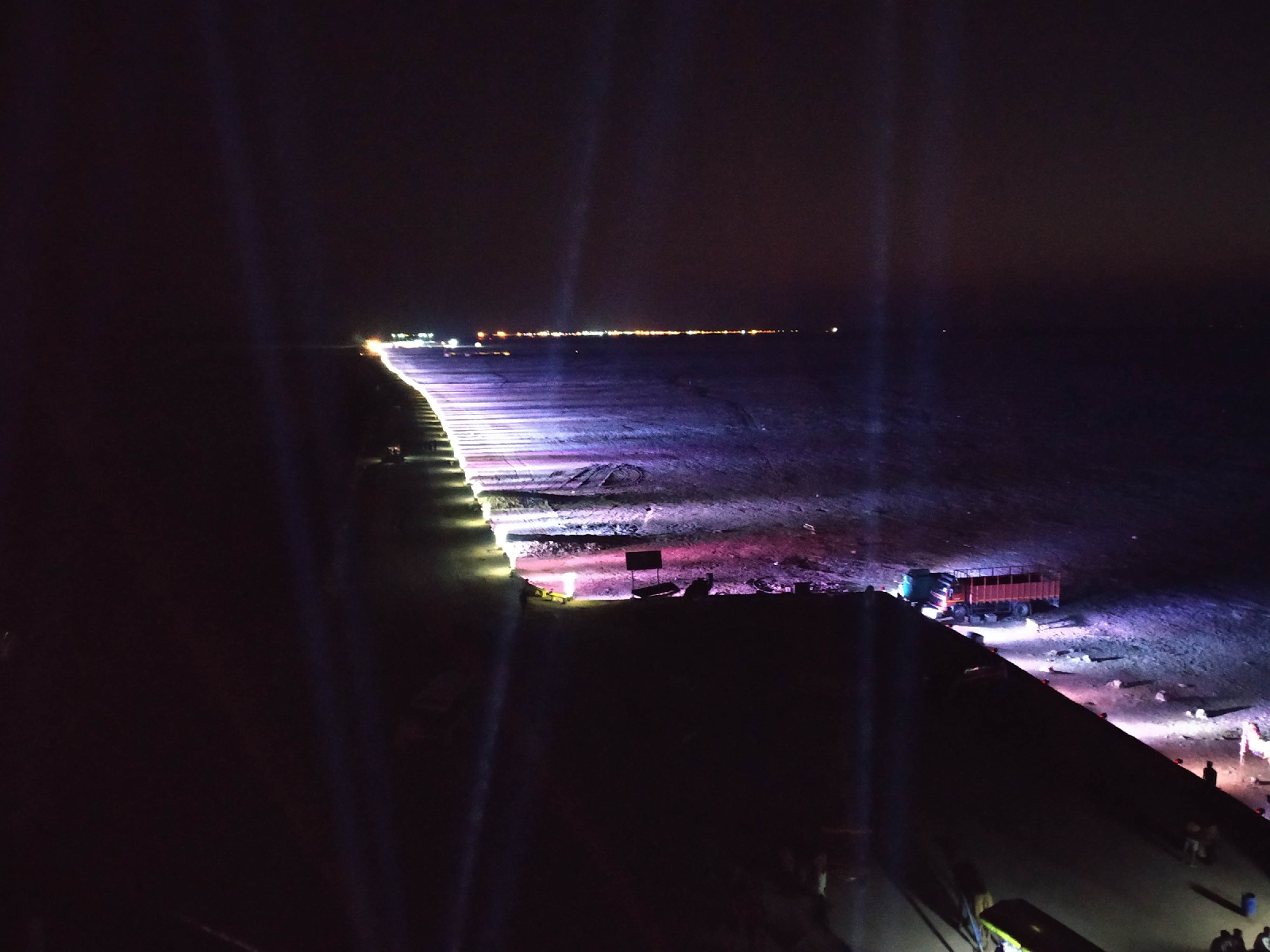 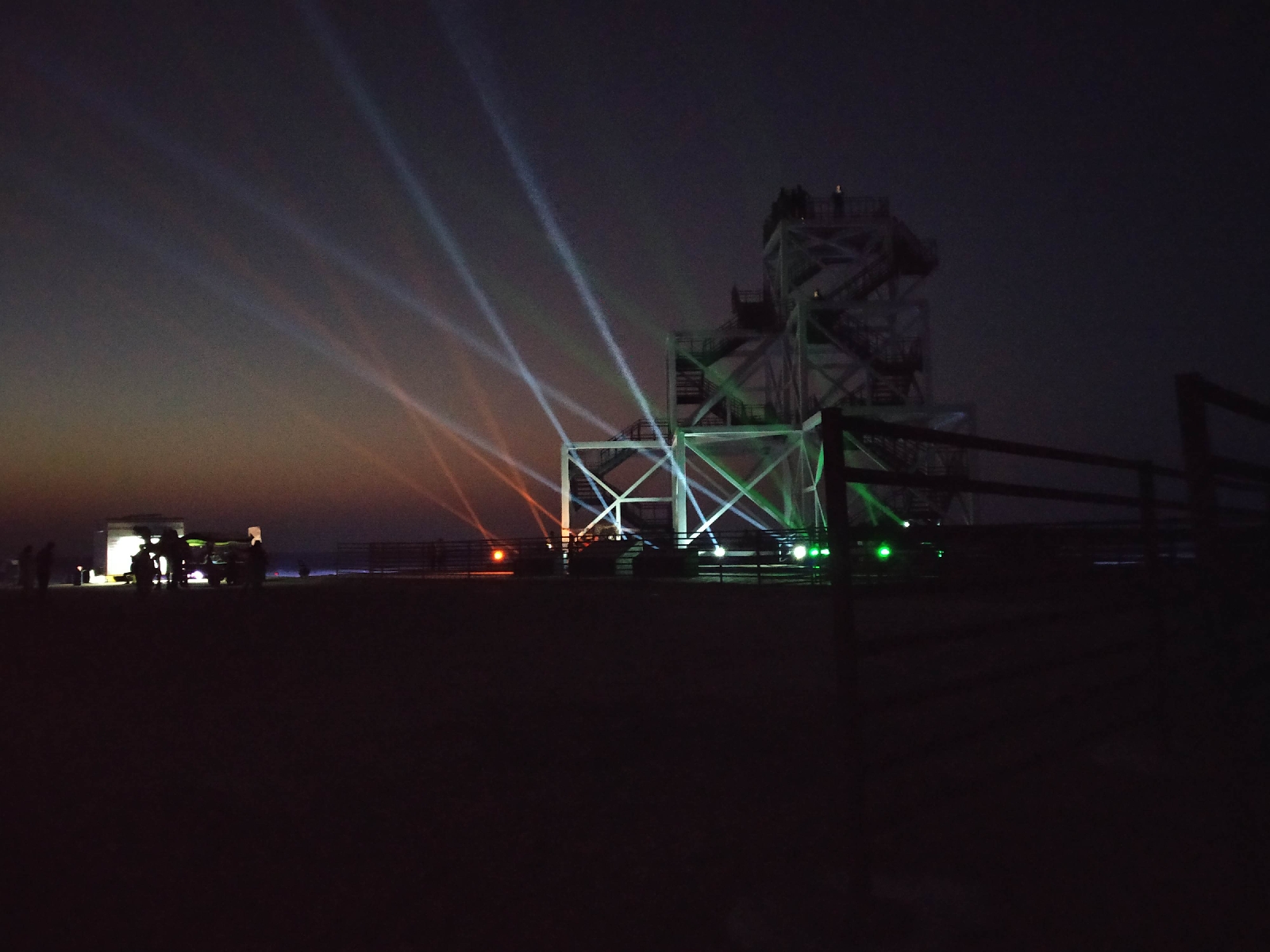 There Runn Utsav is set up few kms before the desert. This is a good opportunity to try the Gujrati cousine, art and craft work. A specialty here, promoted by government as well, the camel milk and it's products. Camel milk tastes good, a little salty and sweeter than cow. Also tried camel milk ice cream and tea called Modi chai. Tried the local food for lunch, seemed authentic and had traditional taste. 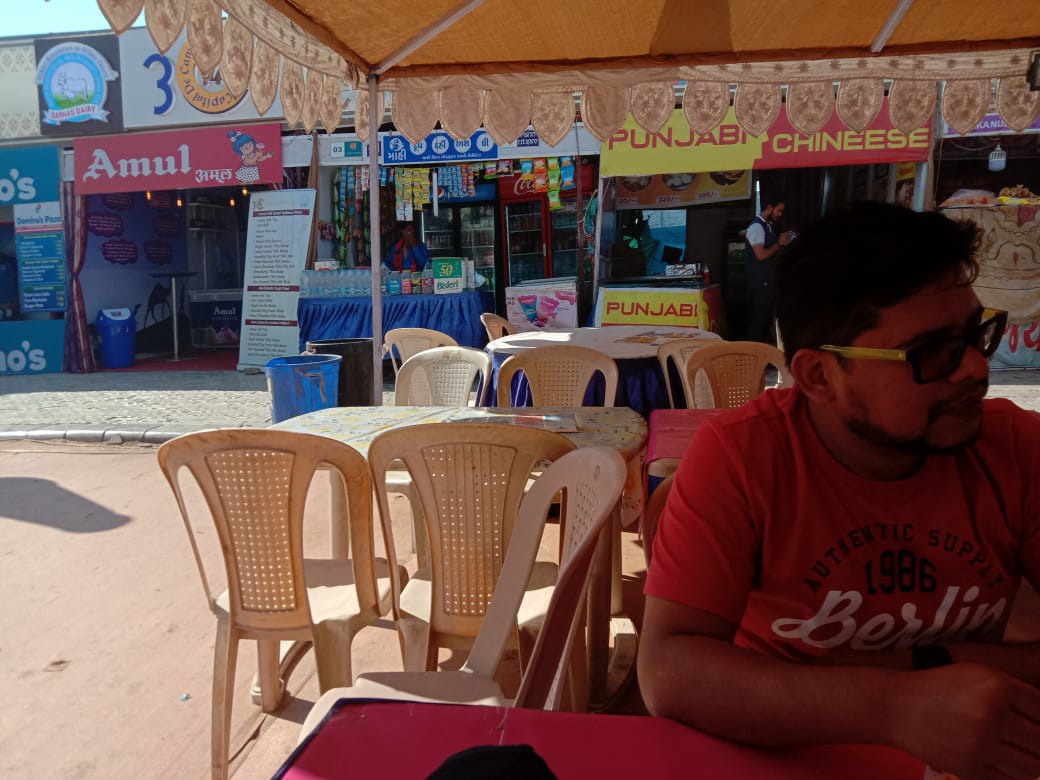 The white Runn is protected area and is under conservation. One has to take a pass to enter. There is a road built on this desert, which is built on cement slabs because it turns marshy in rainy season. 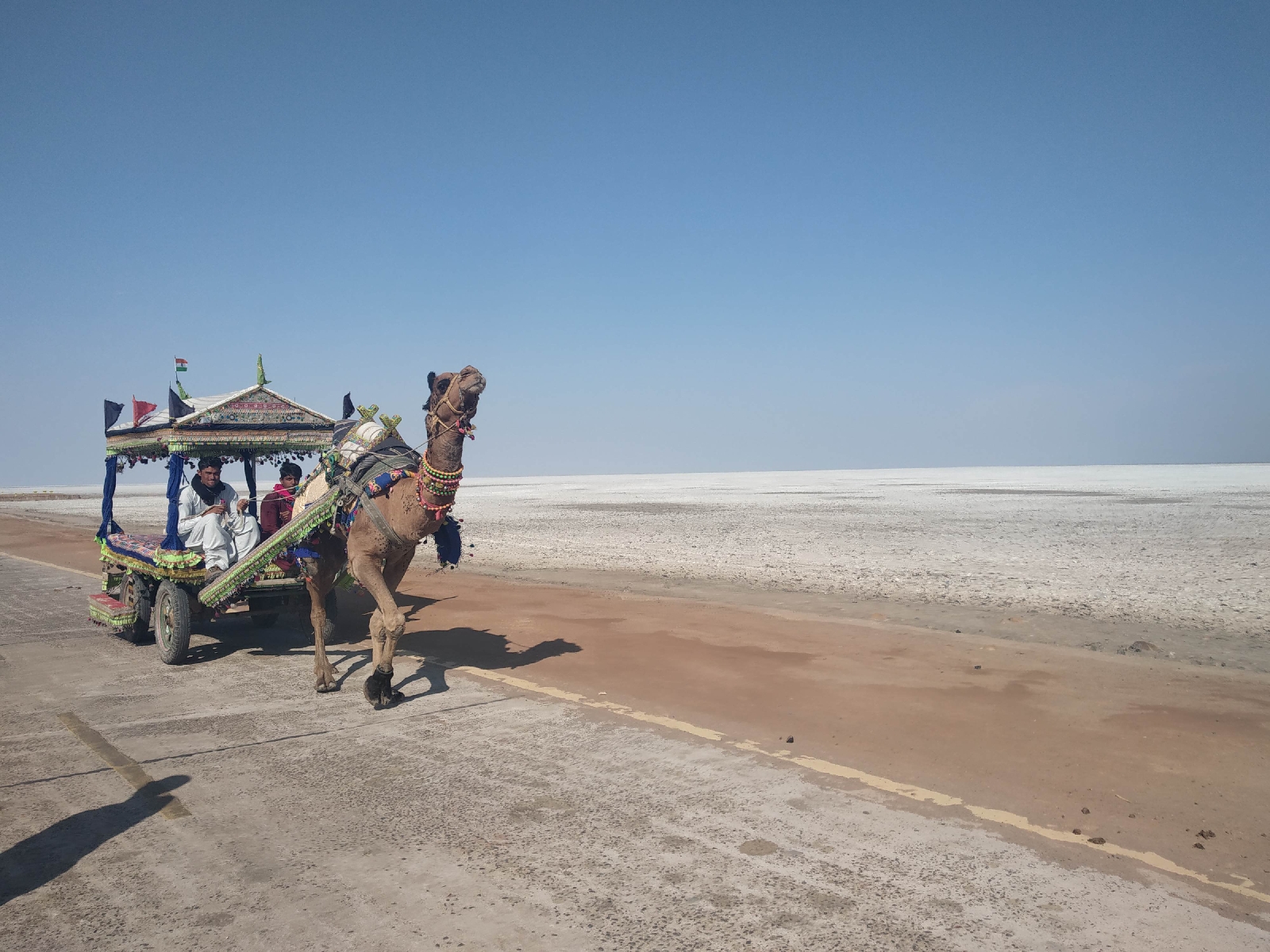 This road takes into the white salt crystals. It feels as if a totally different planet. There are no words to describe the view, it can only be experienced. I jump with joy: 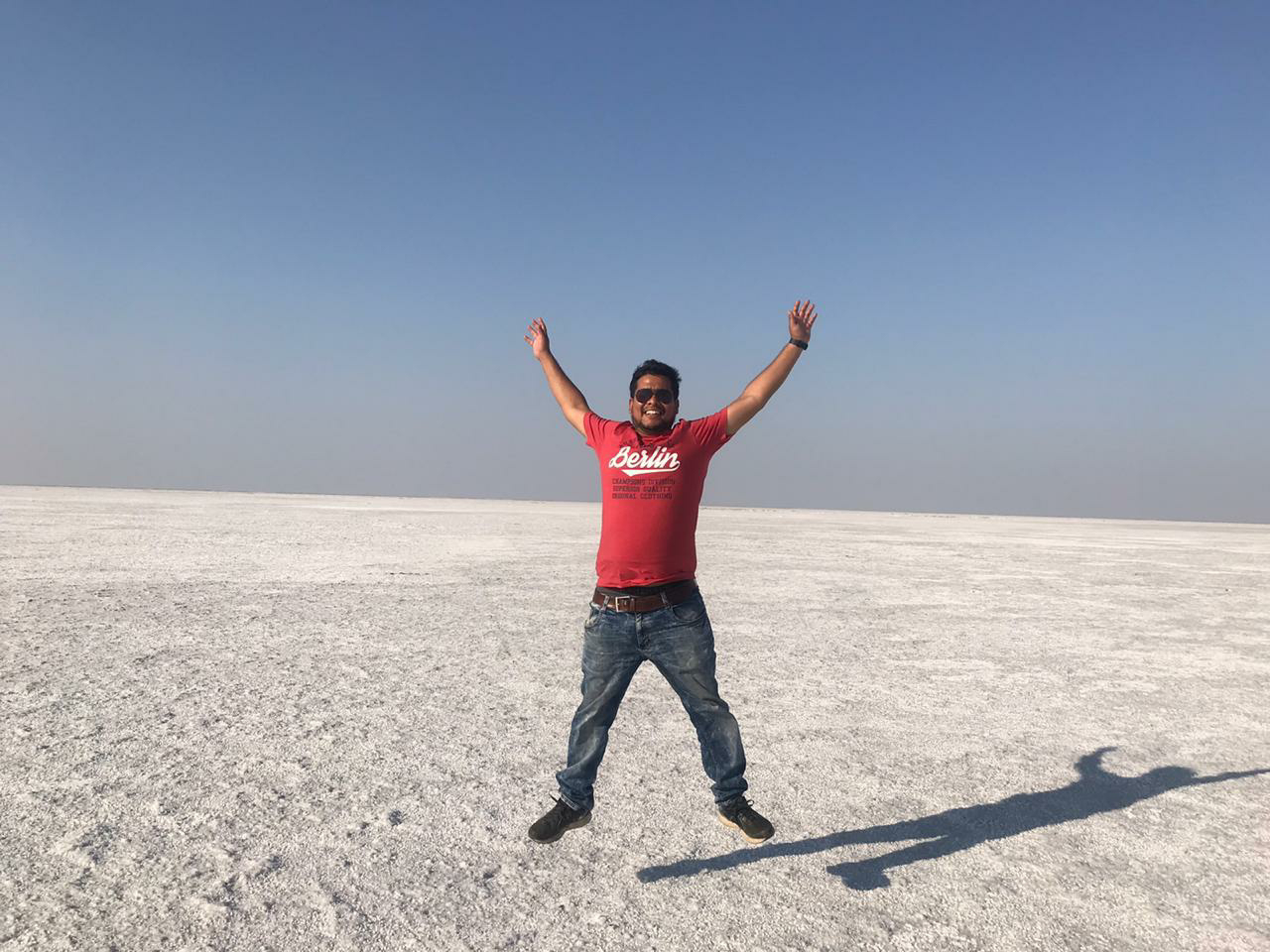 There are camel rides available which take you inside. But we decided to walk, we walked about 1.5 kms inside. It's totally white here. 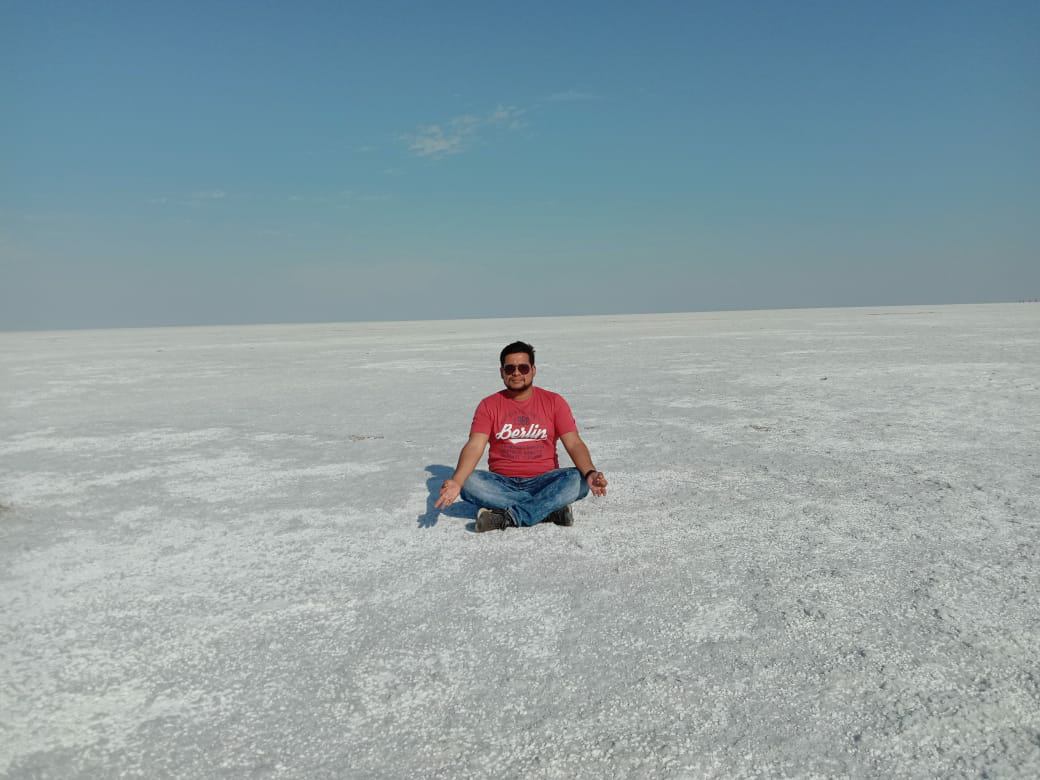 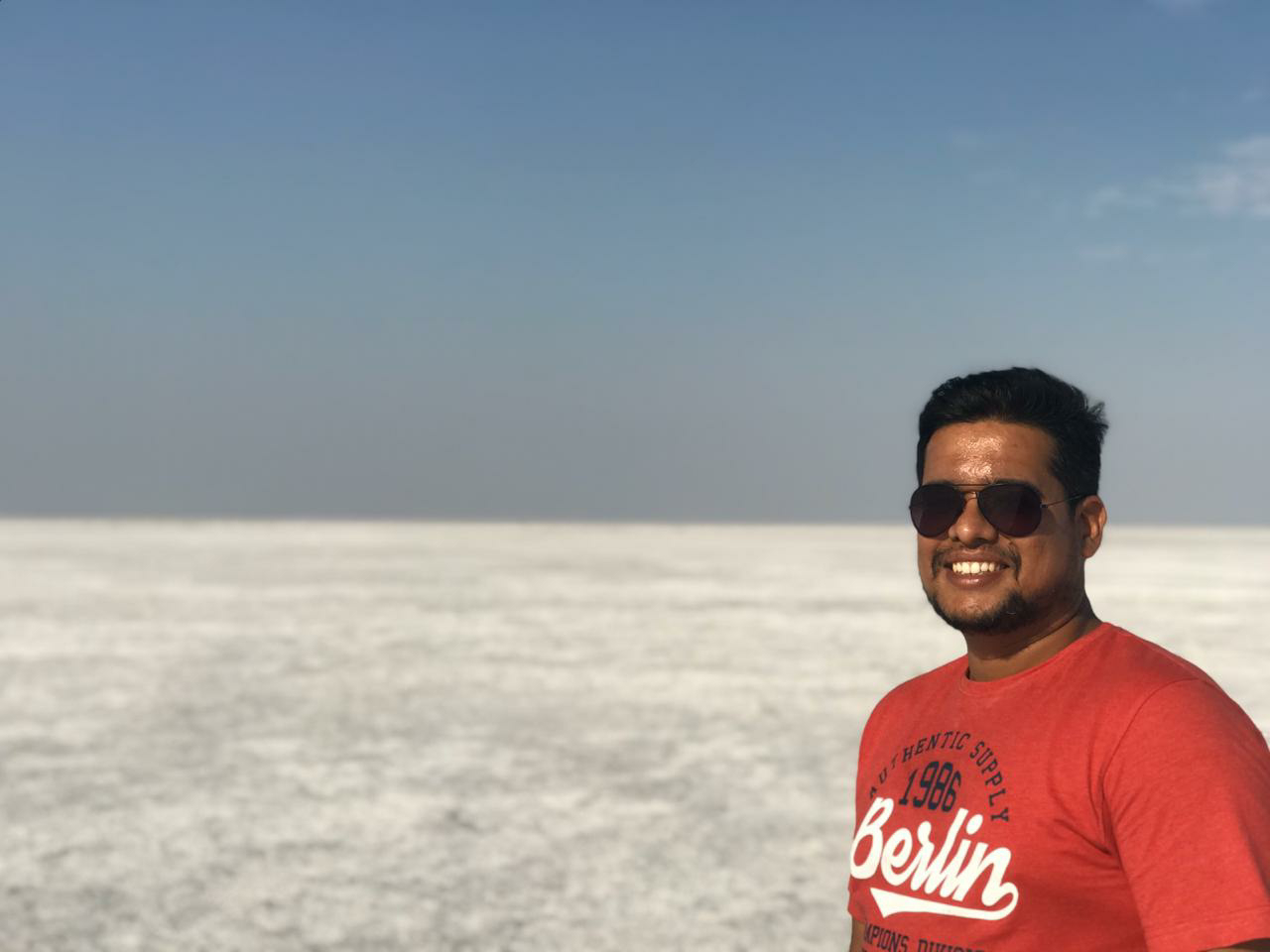 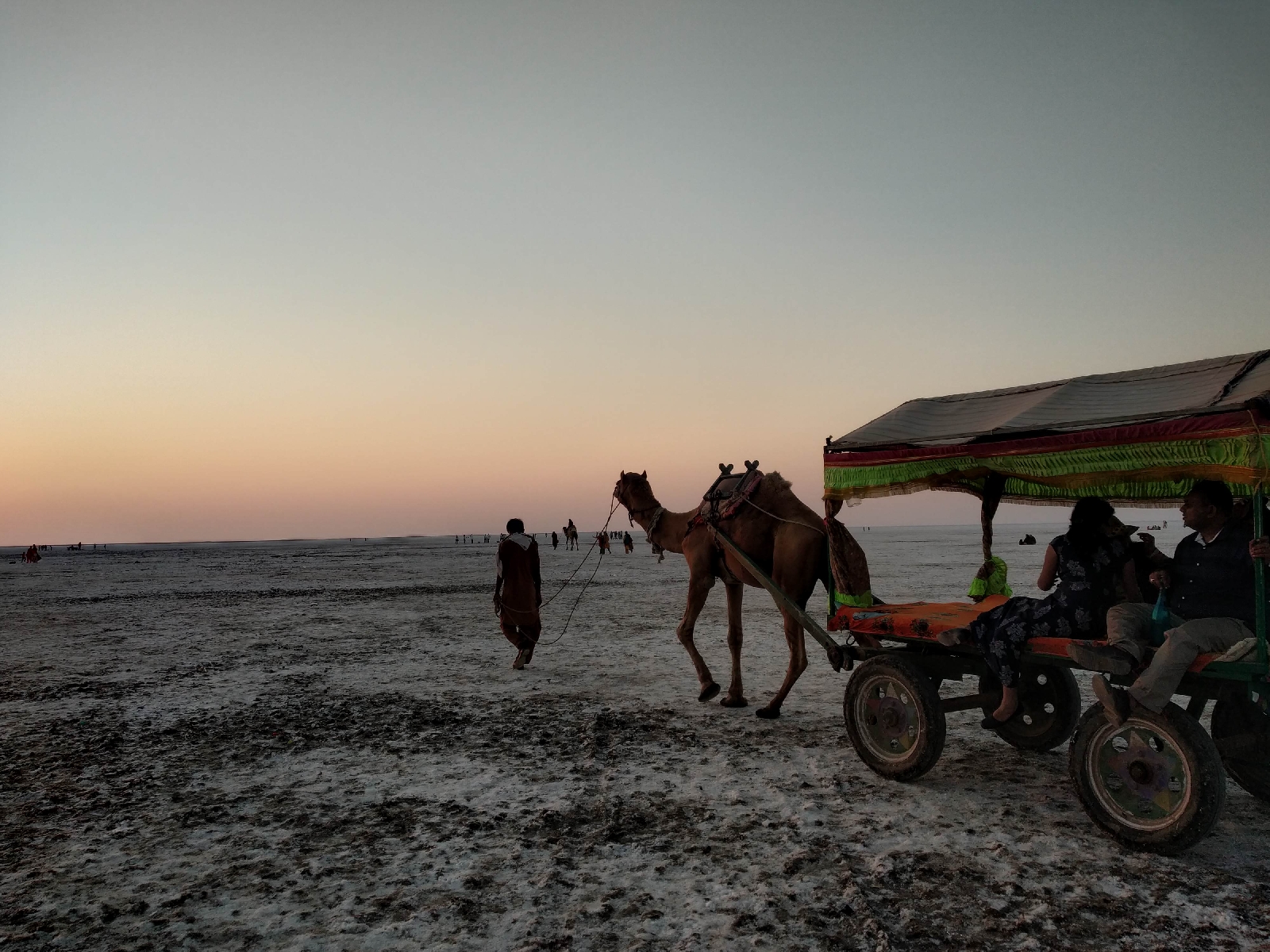 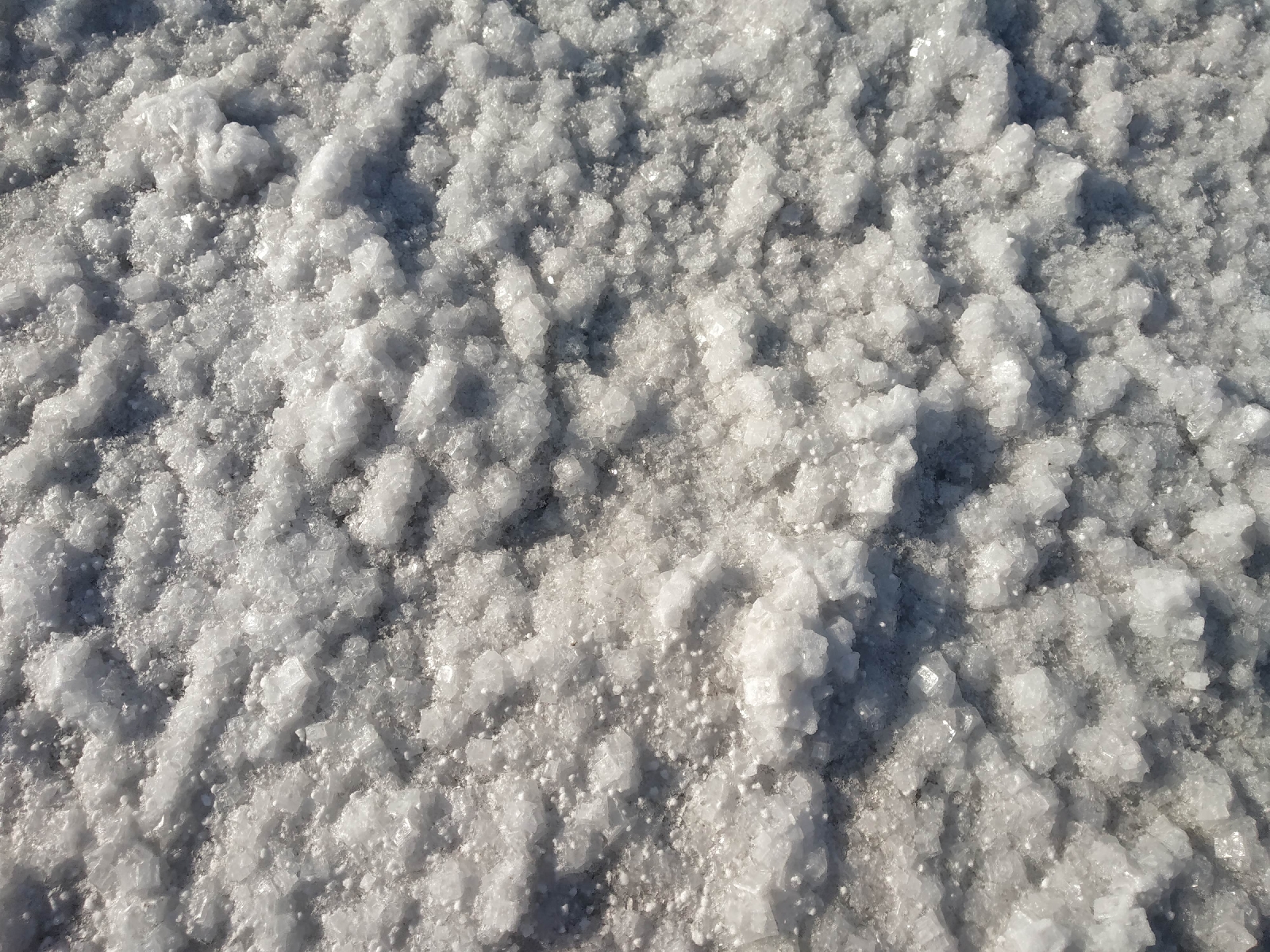 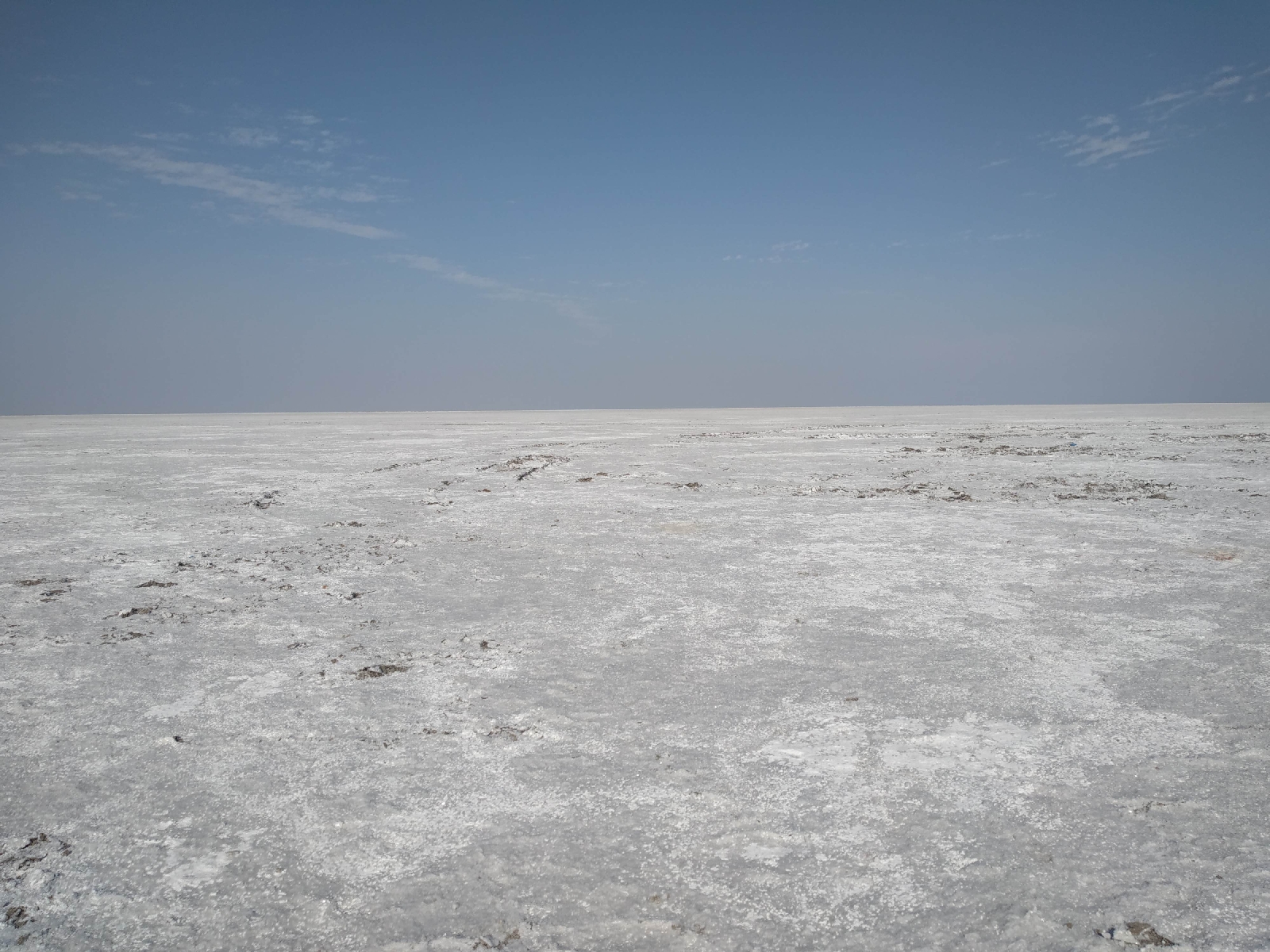 We decided to stay till sunset. We could see the white sand glowing. One of the most unique sunset I have ever seen. 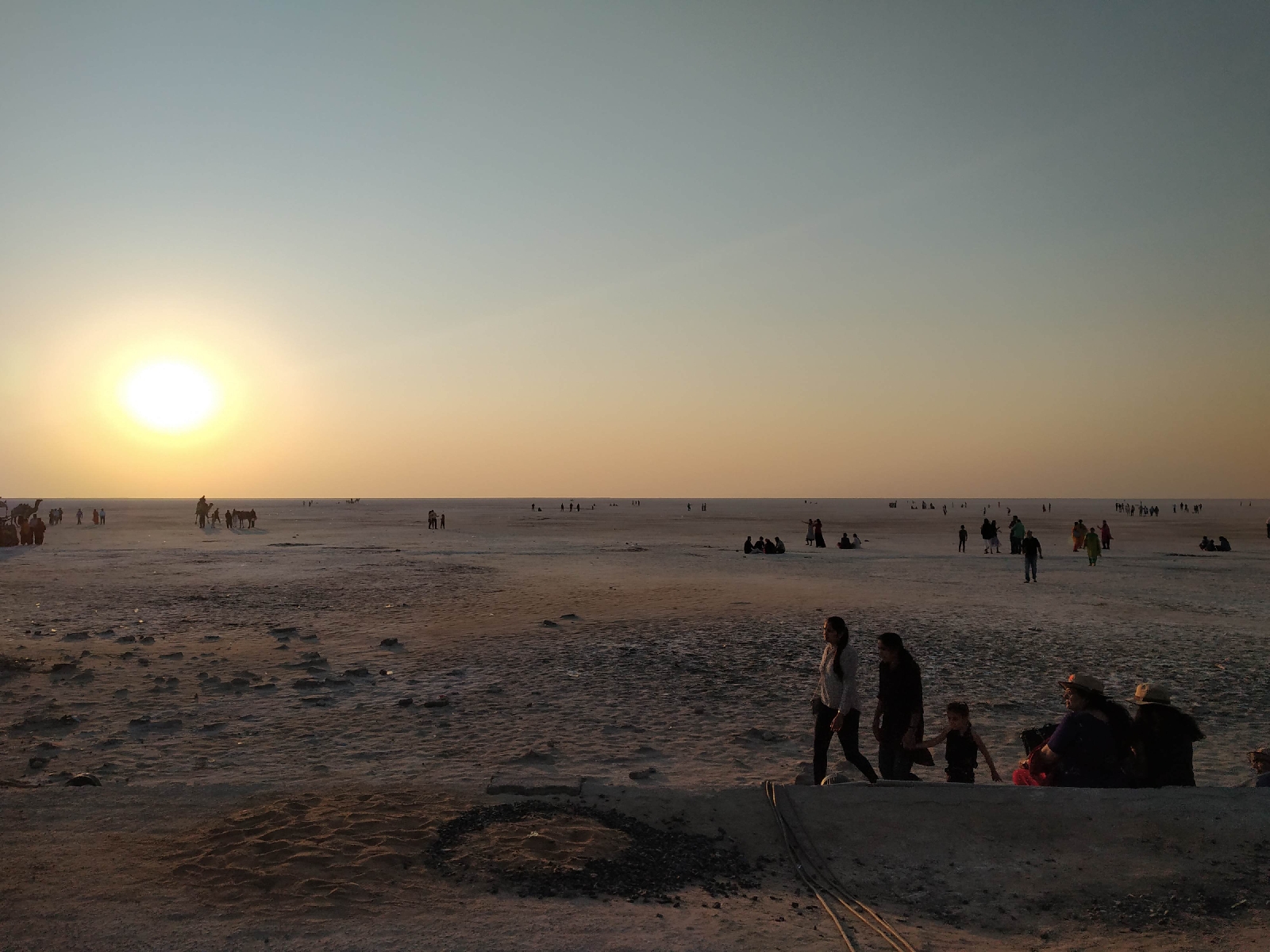 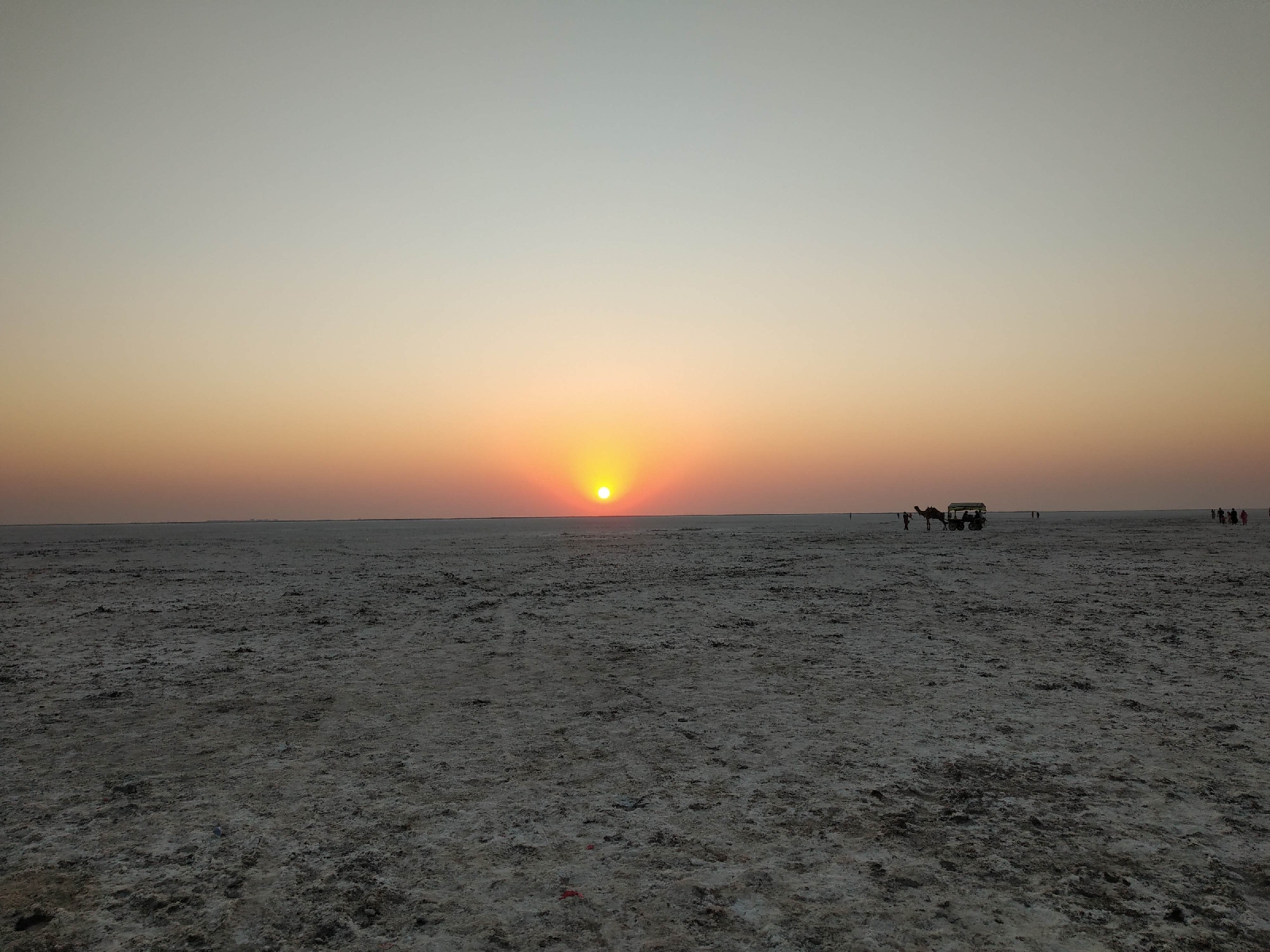 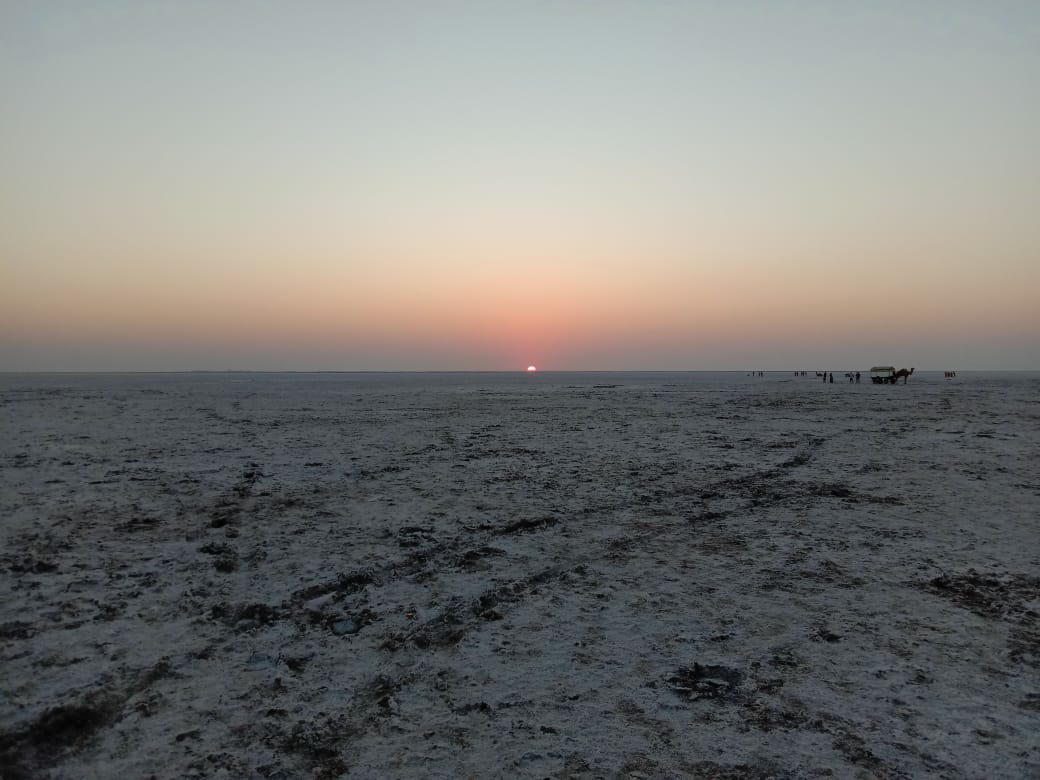   
They have arranged some light show for night. Looked really awesome when these lights reflect. On the other side they didn't do any lighting, you can see the crystal glowing in night. As we bid adieu to this dry sea salt desert, this day will forever be in my memories.
Some history about this land:
It is believed that Saraswati entered sea from here and in it's last life, it used to get dried up here, thus causing this marshy and salty area. Sea also recedes and gives the salt. There are significant scientific proofs. Can't believe I was standing on the course of Saraswati.
From wiki:
Dholavira, one of the largest cities of Indus Valley Civilisation, with stepwell steps to reach the water level in artificially constructed reservoirs.There are more than 150 geographical sites of dinosaur fossils of different periods in Kutch.
In early Hindu books narratives, the region is, under the name of Kachchha or tortoise or coast land, mentioned as a desert with few and wild people

The history of Kutch, a region in the extreme west of the western Indian state of Gujarat, can be traced back to prehistorical times. There are several sites related to Indus valley civilization in region and is mentioned in Hindu mythology. In historical times, Kutch is mentioned in Greek writings during Alexander. It was ruled by Menander I of Greco-Bactrian Kingdom which was overthrown by Indo-Scythians followed by Maurya Empire and Sakas. in the first century, it was under Western Satraps followed by Gupta Empire. By fifth century, Maitraka of Valabhi took over from which its close association with ruling clans of Gujarat started. Chavdas ruled the eastern and central parts by seventh century but were came under Chaulukyas by tenth century. After fall of Chaulukya, Vaghelas ruled the state. Following conquest of Sindh by Muslim rulers, Rajput Samma started moving southwards to Kutch and ruled western regions initially. By tenth century, they controlled significant area of Kutch and by thirteenth century they controlled whole of Kutch and adopted a new dynastic identity, Jadeja.

For three centuries, Kutch was divided and ruled by three different branches of Jadeja brothers. In sixteenth century, Kutch was unified under one rule by Rao Khengarji I of these branches and his direct decedents ruled for two centuries and had good relationship with Gujarat Sultanate and Mughals. One of his descendants, Rayadhan II left three sons of whom two died and third son, Pragmalji I took over the state and founded the current lineage of rulers at the start of the seventeenth century. The decedents of other brothers founded states in Kathiawar. After turbulent periods and battles with armies of Sindh, the state was stabilized in the middle of eighteenth century by council known as Bar Bhayat ni Jamat who placed Rao as a titular head and ruled independently. The state accepted suzerainty of British East India Company in 1819 when Kutch was defeated in battle. The state was devastated by an earthquake in 1819. The state stabilized and flourished in business under subsequent rulers. 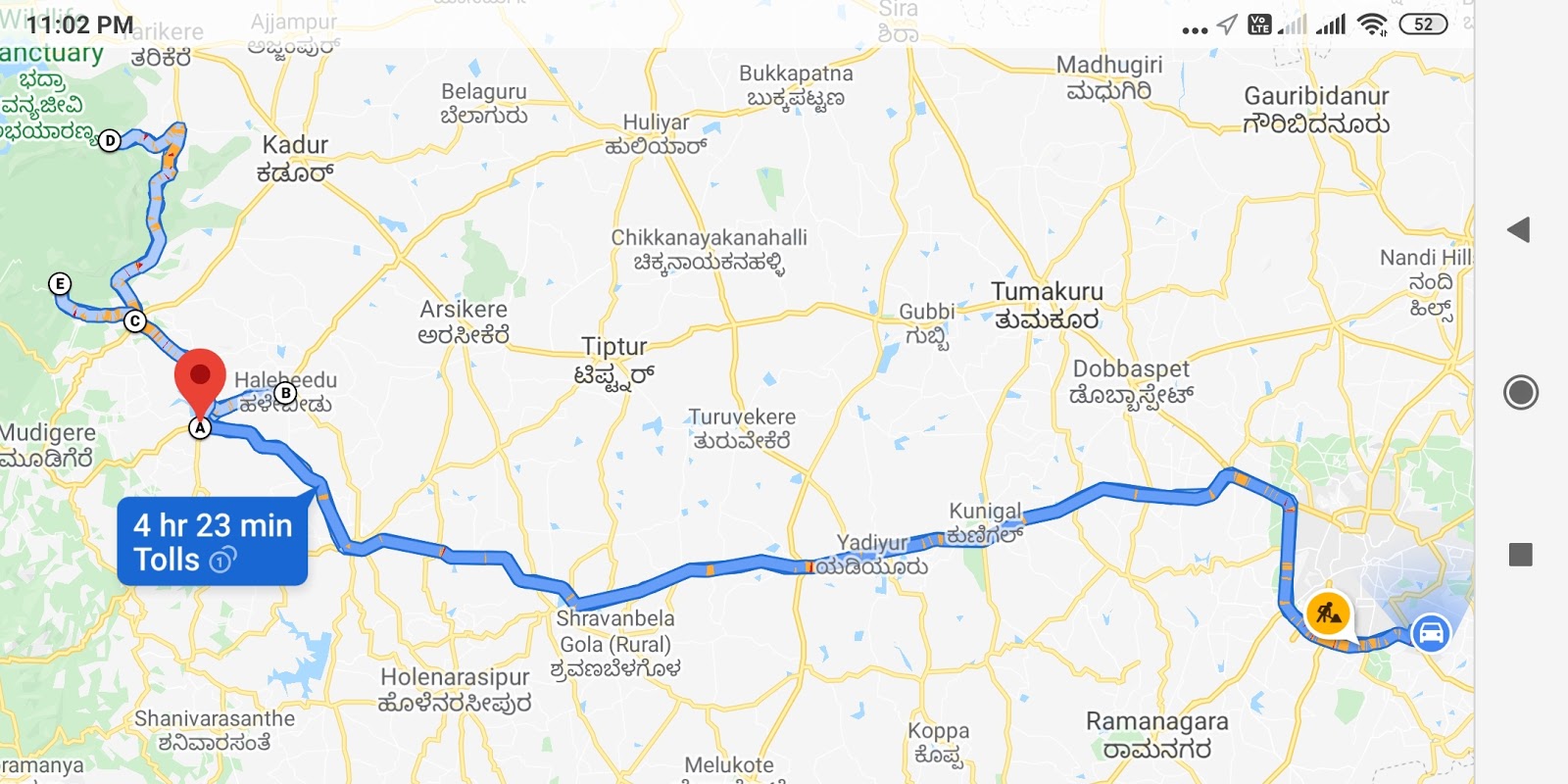 car trip to Hasan and Chikkamangulru

The trip route: Places covered: A. Belur B. Halebeedu C. Chikmagalaur D. Manchethevaru E. Mallanduru Had a weekend and an extra day. Me and Seena were thinking on how to make best use of this time. Yes our favorite pastime traveling. And travel by our car, the car trip. Evaluated few options. Selected Chikmagalaur.  Chikmagalaur is about 5-6 hours from Bangalore. Considering that we made the plan. We wanted to cover few things on the way and reach chikmagalaur by night fall.  We start on the Saturday morning from our home. Geared up with both our backpacks. Had already done with basic car checks and tyre pressure checks on Friday. We start with some light bread omelet in the morning at home and left. Took the NICE ring road to it's end. Then through Nelmangala to the Kunigal road. Had a nice breakfast in Kichchana Halli mane. What a crispy dosa it was. Tasty food, I stopped for the second time here, it's always delicious.  Now to our first place of visi 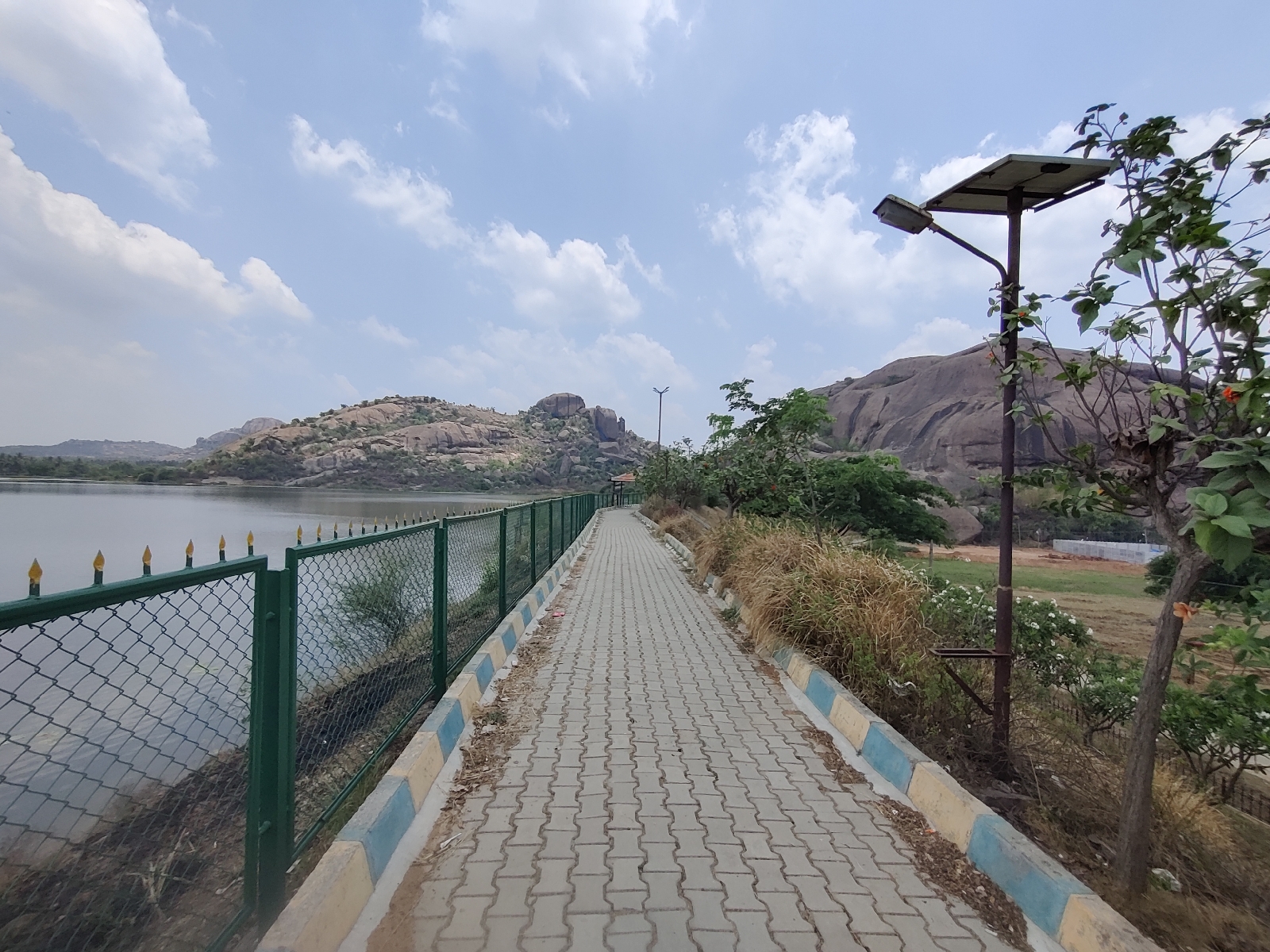 #bangalore #placesofvisit #lake #nature A great place for a days outing. In the nature's lap with big monolith hill on one side to farms and coconut trees on the other, this lake is a heavenly abode of fishes & birds. Great place for bird lovers, can visit in the calmness of morning or evening. We planned this outing all of a sudden, just started from home and decided on the way for this place.  Left home around 9 am, we were late, would suggest to go for early morning ride. Through the NICE ring road took the Mysore road exit. Had the breakfast at the exit, some dosa and tea and headed directly to the lake. The place is at a little deviation from Mysore road after Ramangar. You see the big monolith hill long before you reach the lake. Lake entrance is developed. Your get to go to the lake directly from this entrance. Directly from entrance you enter the calmness of the lake.  You have to come here to feel this serene

Car trip - Start - Deserts of India - The White Run and the Thar.

The trip with my friends exploring the deserts, the White Rann of Kutch, the salt pan and the Thar desert. Going through the history, the forts of Rajputs, the war museum and a cultural heritage. It was my first trip to Gujrat. Have been in Rajasthan long back.  This was a trip planned really fast, with few of the office colleagues who have become such a friends now after running with them my startup. Trip has to be done only with your loved ones!! Such an awesome trip, will put my trip details in my upcoming blogs. We started from Bangalore, had a little work in Mumbai. So had a halt there. Started with the blessings of Siddhivinayak. then took a train to Ahmedabad to start the trip. Got a car from my friend who was also travelling with us. A Hyundai i-10, small car for a big trip, but thats the best which we had. Will be trying to make best out of the trip with this. We are only 3 people, so good for us. The trip to Runn of Kutch starts now. #tripperati